Get ready for the ride of your life Taranaki, because, Finally, New Plymouth Operatic has announced that the international smash hit musical Priscilla, Queen of the Desert will drive on into the TSB Showplace in June 2019. A Divalicious Musical Comedy, Priscilla Queen of the Desert is an uplifting story, based on the 1994 Oscarwinning hit movie, of three Sydney drag artists who hop aboard a battered old bus named Priscilla, on a journey of self-discovery which takes them on a road trip to the heartland of Australia searching for love, friendship and
family.

“We are in the entertainment business” said New Plymouth Operatic President Kevin Landrigan “And Priscilla is pure entertainment”. New Plymouth Operatic will be the only musical theatre society in the North Island to bring the world’s most famous bus to its audiences. With a dazzling array of over 500 outrageous costumes, 200 magnificent headdresses, a spectacular bus and a parade of dance floor classics including Don’t Leave Me This Way, I Will Survive, I Love the Nightlife, Go West, Hot Stuff, Colour My World and Shake Your Groove Thing, Priscilla will be a Just-wanna have fun spectacular. “We are very excited to have been able to obtain the Priscilla costumes direct from the West End production of the show” said Mr Landrigan “They are a showstopper in their own right”. New Plymouth Operatic along with their colleagues from Showbiz Christchurch were able to negotiate the acquisition of the costumes at the conclusion of the Auckland professional season of Priscilla late last year. 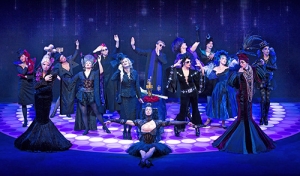 “Obtaining the professional costumes really made Priscilla such a stand out option to stage here in New Plymouth” Mr Landrigan added. Priscilla marks the continuation of the Societies focus on bringing the very best blockbuster musicals to the people of Taranaki, by the people of Taranaki, and follows on from previous hits including Cats, Miss Saigon, The Phantom of the Opera, Mamma Mia, 2016’s Sister Act and the recently concluded season of Mary Poppins, with more of the same set to continue in the foreseeable future “We are now planning through to 2024, and have secured performance rights to bring many more of the worlds best available blockbuster musicals to Taranaki” said Mr Landrigan.

Priscilla represents a completely different type of show from the Societies recently concluded family show, Mary Poppins, and 2018’s Les Miserables. “We couldn’t have got any different” quips Mr Landrigan, who added “When doing our production planning, we try to bring a variety of shows across various years, not just to appeal to different segments of the public, but also our own Operatic members” “Our make-up and costume teams will no doubt be chomping at the bit for Priscilla to arrive”. Priscilla, Queen of the Desert – The Musical is set to run at New Plymouth’s TSB Showplace from Thursday 20 June 2019. Make sure you don’t miss the Bus!