A New Captain at the Helm 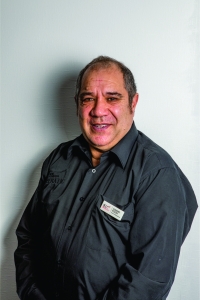 Howard’s elevation to the top job caps a 16-year association with the NPOS.

Howard Rozon is stoked Les Miserables is having its season extended due to popular demand.

“That’s a tribute to everyone involved in the show and to all of the people who have been involved in all of our previous shows – they set the standard.’’

Earlier this year Howard was elected president of New Plymouth Operatic Society, taking over from Kevin Landrigan, who had held the position for the last nine years.

“I came to watch the society’s production of Joseph and the Amazing Technicolor Dreamcoat all those years ago with my then partner and I said to her “I could do that’ and unbeknown to me she then put my name down to audition for their next show Stages.

“The first I knew about it was when I got a letter telling me when and where my audition would be. So I was well and truly set up, but I was fortunate enough to get a place in the ensemble and it’s been a great journey ever since then.’’

Howard grew up in Whanganui and he says there’s always been music in the Rozon household.

“Being Māori there‘s always been parties and guitars and saxophones, mandolins and everyone’s sung. I’d always enjoyed singing and done karaoke, but my Mum Edna has always been a really good singer who is still involved with Country and Western Clubs in Whanganui, although she is well in her eighties.’’

Howard is modest about his own singing ability, but it’s an opinion not shared by many others who rate him highly.

“I know my limits. I prefer to be on stage, but not every show in operatic does it for me. I actually prefer to do the Christmas cabaret shows – which are more my forte,’’ he says with a chuckle.

Again Howard tends to undersell himself.

He’s played some memorable roles over the years but one that will stick in the mind of many who saw it was his impersonation of Billy T James, complete with black singlet.

Howard also had that rare ability to slip from comedy to belting out a big ballad effortlessly and there’s no doubt he brought the house down.

Howard reflects on the past but pauses to make a point of recognising the contribution of those hundreds of people who work so tirelessly off stage.

“You don’t have to be on stage to be a valued member of this society. For every person the audience see on stage there are another six or seven people behind who get them out there.’’

Howard said getting volunteers was an issue for many organisations, but the Operatic Society was lucky in that regard.

In today’s world, it’s not always easy as people are time poor, but as a volunteer amateur society, it comes down to me to look after them. We earn money from the shows and people pay good money to come and see them, so we’ve got to, as a society, put some of that back into our people. It’s all about the people.’’

Howard first got involved in the administration side of the society six years ago when he was first elected on to the Board of Management.

“It’s completely different to being on stage, obviously, but I see the Board as being in a supportive role, being behind everyone. There’s so much work that goes on behind the scenes.

“It’s a bit like watching the Hurricanes. The team plays the match and behind them you’ve got the coaches and support staff who are left to do their job and the chief executive and the marketing people. Then there’s a Board behind everyone. We’re pretty much the same. There’s a lot of work that goes into it two or three years out and there’s everything that goes with arranging that, with production teams, the logistics of getting sets and costumes and the show together.’’

This year Howard knows he’ll be spending more time than usual front of house. “I’ll be more visible. In some ways I’ll be the face of the Society. I love getting feedback from the audience about what they enjoyed, or what we could improve on.’’

“I’m sure it’ll have the wow factor for people. This time around we’ve got a lot of new people in the show. There are some who are new to Taranaki but have theatre backgrounds and about a third of the cast who are new to New Plymouth Operatic as well.”

Howard paid tribute to the work of former president Kevin Landrigan. “He and the board have worked hard to make the society what it is today and I certainly acknowledge that.

“I’m very happy with the board I’ve got and Kevin is part of that as the past president. I’m just the new captain at the helm, but really they are the engine room. We’re focused on putting on a great show and I’m delighted that we pay homage to our whakapapa, such as the Murphys, the Landrigans and the Bennetts and all those people who’ve come before me.

“I’m particularly pleased that we’ve had to extend our season of Les Miserables because of the public’s demand for tickets. I’m a very proud man.”