It is with great honour that New Plymouth Operatic bestow a life membership to Jenny Bennett. 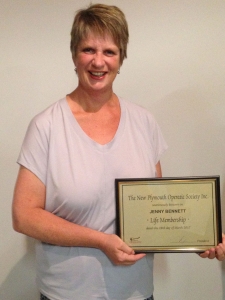 Jenny has been involved with New Plymouth Operatic since 1975 (she must have been very young!) appearing onstage in Lil’ Abner.  More than 40 years later Jenny is still involved with as much passion as ever.

Her first on stage performances came at the age 12 in the 1975 productions of Music Hall and Lil’ Abner.  She was involved both on and off stage in many of the productions over the next  8 years before she left New Plymouth for a few years settling in Sydney.  On her return to New Plymouth in 1992 she quickly rejoined the society production and back stage crews, taking on numerous tasks including props, programme creation, marketing, and production manager.  In recent years Jenny has been our regular props supervisor and she and her team always enjoy the experience.  They are known for their back stage performances including tap dancing and post-show skits usually led by Jenny.

Jenny was elected to the New Plymouth Operatic executive in 1997, where she served for 20 years, until her retirement in 2016. Jenny held the role of President of New Plymouth Operatic for 4 years from 1999-2002, and Immediate Past President from 2003 to the present day. In a small but successful team, Jenny’s continued service on the board is an asset to our society.

Like many of our society’s members, Jenny’s involvement has been a family affair and she has followed in the footsteps of her mother, a seasoned performer and life member of NPOS and her father, a long time committee member and honorary vice president. She has also encouraged her former husband and sons to catch the musical theatre bug and all have been on stage and worked backstage for the society in numerous productions, most memorably the whole family performed in the cast of our 2005 season of Oliver.

Jenny’s commitment to NPOS has not slowed, she was a performer in our recent hugely successful Xmas dinner & dance shows, and onstage performances in The Producers (2012), Mamma Mia (2015) and Mary Poppins (2017).  She is continuing in her role as Immediate Past President on the society Board and will likely be seen, and heard, for many years to come.