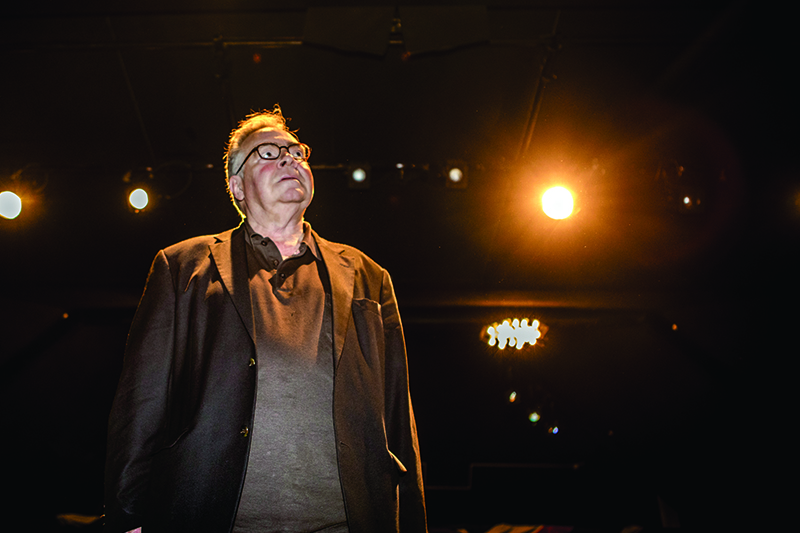 “We’ve brought the show into the 21st century. Let’s face it, it was 25 years ago that people first saw the show and 16 years since they last saw it in New Plymouth and so much has changed since then.

We didn’t have i-phones for example, so of course the technology has gone into a digital world.”

The special effects that have made possible are bound to be a highlight of this year’s production and goes some way to giving this production its own unique character and emotion.

Naturally Warren doesn’t want to give away all of the secrets but there are different dimensions to the show not seen here before.

“We’ve gone with a traditional set this time, with the revolve, and a high-definition LED light wall at the back of the set, all with some innovative lighting.

“It’s about trying to achieve a midpoint between a cinematic journey and a stage journey and marry them together. It’s actually quite exciting.”

In trying to make the show as true as possible to the novel Warren describes the show as ‘raw’.

“It’s indicative of the times of that period. That was a time when women were suppressed and this is almost nonfiction. The music makes it a bit more fictional, but as a director I have to seek the truth and extract the believability from the audience’s point of view.’’

It’s been a labour of love for the veteran director who went through a painstaking auditioning period to get exactly the right person to play each character. The rehearsals have been going on for months and increasing in intensity, but he remains very aware of the fact that everyone in the show is a volunteer.

“The No 1 difference is everyone is here because they love it and so there’s a pressure point as to how far you can push them.

“I’m always mindful that for the cast it’s a hobby. It’s not as if though they are on a payroll. Any time I commit to directing I balance that against my main commitment, which is to the thousands of audience members.

Warren says he is sure they are on track to achieve just that.

Warren gives a rare insight into his role

How do I describe what I do as a director?

“A good proportion of my job is about co-ordinating a whole lot of people who are very talented and trying to create an environment in which they can do their very best in whatever given area of expertise they’re working.

The other side of it is working out how best to tell a story and in a sentence, my role as a director is to disseminate everyone’s skills over the given story to bring it to life.

Right from the beginning, one should not become so fixed about how you have imagined something that someone can’t actually improve it.

You have to leave the door open for the other brains that you’re using to go: ‘Yes, you’ve given me this picture and now I’m going to colour it in to give it greater depth.’

You really want to keep that through the entire creative process.

Whether you’re working with the creative team, stage management or an actor, you may say: ‘These are the lines and this is where I feel the emotional arc is in the scene’.

The more fluidity there is in the creation of a work, the more likelihood of creating something believable.

That said, if something comes along that destroys your initial image of what it was going to feel like, it can be not very much fun. But I’ve rarely found that getting super stressed and shouting at people gets anything better done than trying to stay calm.’’

“I’m really conscious of the horror of the auditioning situation, especially selecting from a small community of local actors where reputably, the particular show is internationally legendary. I find in most cases, one has to cast intuitively, thus much of my energy in auditions goes in to getting actors relaxed enough for their natural personality to come through. In casting, you’re looking for the essence of who the person is that you’re trying to cast.

If the essence that an actor possesses is not the essence you as a director think you’re looking for then that’s not their fault.

One of the things I always find when I’m casting is that for 85-90% of the people that come in I think ‘ah, if only I was doing that show, this person would be perfect in it’. You can see the quality that person has that’s so them and special and great but there’s nothing you can do about it if the show you’re casting doesn’t have that role in it.’’

A few things about Warren Bates

Les Miserables director Warren Bates is happy to talk about pretty much everything under the sun, or on the stage, with one exception – himself. So here’s a few facts about the man who plays such a big part in Taranaki’s musical and theatre scene.

Kevin Landrigan was President of New Plymouth Operatic Society when it secured the rights to Les Miserables. “From the moment we heard a whisper that Les Miserables rights might be becoming available, we hoped we would be able to secure Warren’s services.

“Les Mis is a Warren show. He will create an outstanding production that we will all be very proud of.’’

His confidence in Warren’s ability was well founded. Bates has directed several productions including Miss Saigon, The Phantom of the Opera and Sister Act for the society, to name a few. All achieved outstanding critical and box office success.

Warren’s involvement in the Performing Arts and Entertainment go back more than 25 years.

His many credits include being Company Manager of The Australian Ballet for tours of Australia and throughout the world; Company Manager for the Australian and South East Asian tour of The New Rocky Horror Show; Associate Producer for the Australian tour of A Tribute to the Blues Brothers and was General Manager for Paul Dainty Productions, who brought top international acts Michael Jackson, David Bowie, Rolling Stones and Pink Floyd, as well as stage shows, ‘Mamma Mia’, ‘Jersey Boys’ and ‘Hairspray’.

There’s so much more, but suffice to say Warren Bates has launched many careers in Taranaki since returning to Taranaki in 2005 by founding Stage Centre, a performing arts school covering many aspects of theatre including improvisation and musical theatre.

In 2006 he was appointed as NPOS Artistic Director.