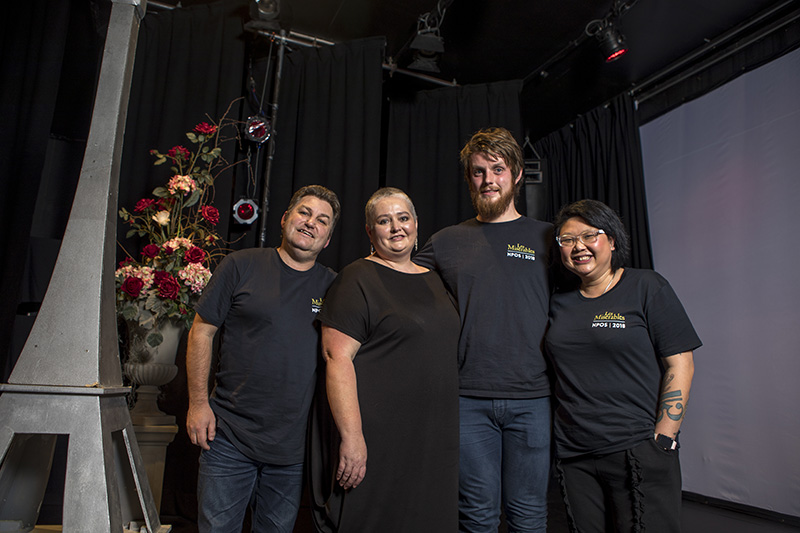 In the lead up to the opening of New Plymouth Operatics production of Les Miserables, Gordon Brown speaks to some locals in the cast.

The society putting on Les Miserables may well be called the New Plymouth Operatic Society, but the truth is every show they put on is a true Taranaki effort.

There are several others working behind the scenes who also hail from the southern end of the region.

Perhaps the most recognisable face of the quartet in the show is Eltham’s Tracey Blake who plays Madame Thenardier.

Although Les Miserables is her first show with New Plymouth Operatic she has a long association with the Society, taking over the drama classes when Dorne Arthur retired.

“That was before Warren Bates arrived, but now I’m in the cast with several of my former students,’’ she laughs.

For Tracey it’s a case of back to the future as she has been more used to directing in recent years.

“It’s been more than 20 years since I was on stage so this is quite a change, but having been bitten by the bug again, as they say, I thought I’d have a go.

“To be honest I’m still a bit shocked. There’s so much talent there, especially in the principal roles, and most of them are a hell of a lot younger than me, but I’m thrilled to be playing Madame Thenardier, especially under Warren, who I got to know well during my time as head of drama at Stratford’s St Mary’s Diocesan School. “And let’s face it, it is Les Miserables!”

Another making her debut in the show for New Plymouth Operatic is Chrys Podjursky, from Hawera.

“I heard about the auditions through Hawera Repertory, but thought the roles were all done and dusted, but when I heard auditions were on I thought ‘what’s the worst that could happen’, so I gave it a go.’’

She impressed with her vocals and is now a member of the ensemble for the show.

“I started singing in the school choir when I was 11 and have been singing ever since, mainly in choirs,’’ she says.

Shaun Campbell may live in Hawera these days but he is a veteran of no fewer than 26 New Plymouth Operatic shows.

He’s also a member of the exclusive 25-year-club at the Society, having appeared in the first production of Les Miserables the Society put on in 1994, and then again in 2002.

Born in Stratford, Shaun lived most of his life in New Plymouth but shifted south to become Head of the Music Department at Hawera High School.

He admits travelling to New Plymouth for rehearsals has its challenges. “But if you want to be involved in the show, that’s what you’ve got to do,’’ he says with a chuckle.’’

The final one of the southern four is ensemble member Sam Barrett, who is appearing in a musical for the first time.

“I’ve never done any theatre before. I just wanted to do something a bit different; my life was getting a bit stale. I play guitar and sing a bit but I’ve never had any professional training.

“I’m really enjoying being part of the show though. My cousin Martin Quicke is also part of the ensemble and he was the one who suggested I should audition.’’

All of the four, apart from Tracey who works in New Plymouth, tend to car pool with the other south Taranaki based members of the show to keep the costs down.