In the News – Our Catering Superstars 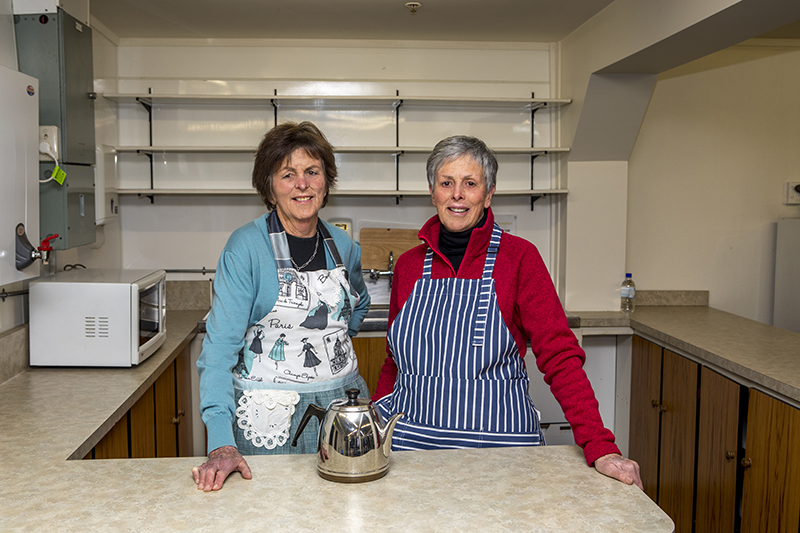 That’s because they organise the catering for the society when it’s show time and there’s far more to it than most people would ever dream of, but Cath and Sue run it with military precision – and a smile.

The nickname doesn’t even begin to do them justice, but like so many Operatic Society volunteers, modesty is the ultimate byword. A more accurate appraisal came from a show insider who wished to remain anonymous in case he wouldn’t be fed when they read what he had to say: “They are the most important people in the production and I am not joking. Keeping 250 volunteers fed and watered every night is no easy matter.”

Between them, Cath and Sue’s catering team of 10-12 have close to 500 years involvement with New Plymouth Operatic, which gives an insight into their level of commitment.

Both sisters performed extensively on stage when their long association with the Operatic Society started, but, in later years they have worked front-of-house as ushers as well as overseeing the food operations.

Cath, Sue and the team they have been hard at work for many weeks already, long before the curtain for Les Miserables goes up on opening night.

“It all starts with auditions,” says Cath. Those holding the auditions have to be fed and with a few hundred turning up for auditions, they do the decent thing and feed them as well as the hopeful Mums and Dads who can be there for hours on end.

“Then rehearsals start months out and there’s ‘boot camps’, pack-in and the show itself followed by pack-out.”

A trip to the supermarket starts the process. “We fill two trolleys with food and sometimes people look at us sideways because we have 50 packets of biscuits,” laughs Cath.

They also have much more, all gleaned from a comprehensive two-page list that Cath usually puts together. Then there’s the list of days, times, and menus from morning tea to supper and everything in between. Everything is recorded on a spreadsheet of course and nothing is left to chance.

Rehearsals start in earnest months in advance, initially three times a week and then four a week plus ‘boot camp’ which is all day Sunday.

But perhaps the most demanding is ‘pack-in’ when the sets, lighting and the stage floor, arrive and literally have to be taken from containers as quickly as possible and set up in the TSB Showplace.

“There’s about 40-50, mainly men, because of the heavy lifting involved. With Les Miserables it will take three full days, especially with the barricade adding an extra dimension,” says Sue.

The team of willing volunteers start at 8am and at 9am it’s morning tea: “We do hot scones, sausage rolls and meat pies. We have an amazing team of 10 ladies who help us and there is a conveyor belt of them helping with lunch, cutting, buttering and filling bread rolls with luncheon, chicken, and salad – these days there’s always vegetarian and gluten free requests – plus big cups of soup, sausages, saveloys, bacon and egg pies followed by apple shortcake, fruit and cake in the Green Room.”

Sue adds the philosophy is a simple one. “If we don’t feed them well they don’t come back!”

At the end of the show is ‘pack-out’ in which the process is reversed, although sometimes there is even more urgency because someone else has hired the theatre and everything needs to be gone ASAP.

Both Cath and Sue admit to being huge fans of Les Miserables. “It’s marvellous, a fantastic show.”

“We’ve probably watched the show at least 20 times, but every time you watch it you get something more out of it,” says Cath, who, not surprisingly is a life member of the NPOS.

So when you watch the show, spare a thought for the ladies in the kitchen, to put it into bowling club jargon. They do a mighty job and are an integral part of the show and have been for many years, like so many others.