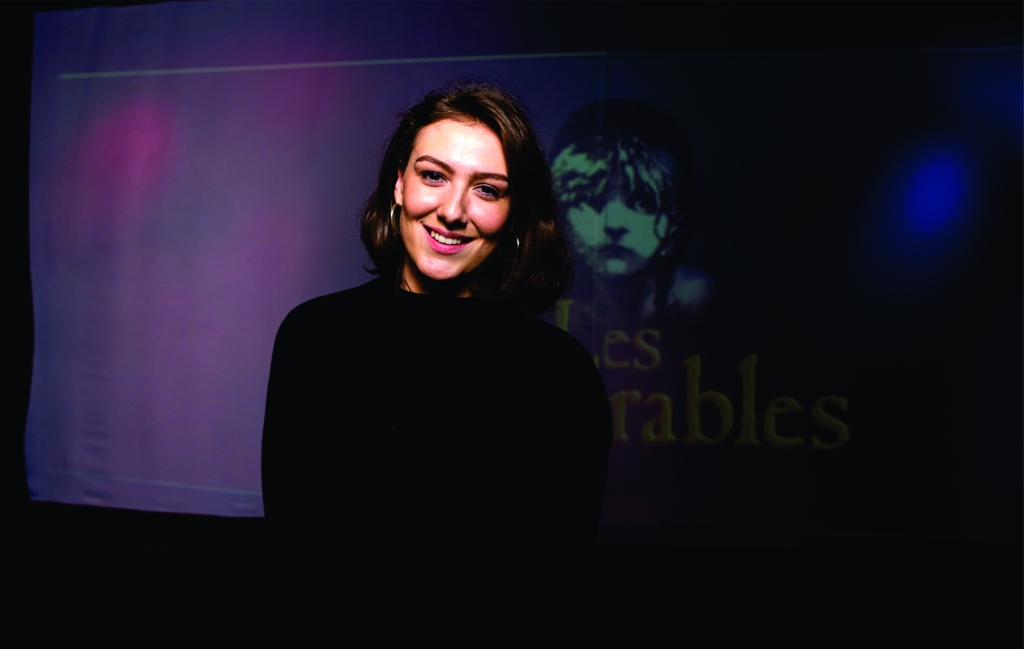 Maria has been studying musical theatre in New York for about 18 months, but wanted to be in Les Miserables

From New York to New Plymouth

It was her way of auditioning for the part of Fantine in the show and was proof of just how keen she was to play the coveted role.

Her video did the trick and on July 26 when the curtain goes up at the TSB Showplace for the first night of the New Plymouth Operatic Society’s production of Les Miserables, Maria will be Fantine.

The audience should be prepared for a revelation. Maria Mosquera has star quality. Even her name reeks of stardom and she is set to become one of the stars of the show.

Victor Hugo’s brilliant musical’s headline number is I Dreamed A Dream and it is Fantine who has the privilege of singing it, something Maria was well aware of when she auditioned.

“I’ve been studying musical theatre in New York for about 18 months now but I wanted to be in Les Miserables and it worked out perfectly because it’s the long summer break over there.’’

She says playing Fantine is an iconic role.

“She is a character who resonates with so many people. And I really love playing her. It can be hard to get people in the audience to feel something, but Fantine is one of those roles where people do feel for her and they’re the ones who keep coming back.

“Plus I get to sing I Dreamed A Dream, which is a great song and one that everyone associates with Les Miserables.

“The music in the show is absolutely stunning. It never gets old and every night at rehearsals it’s great to hear it again and again.‘’ Les Miserables is Maria’s first show for New Plymouth Operatic but she knew a lot of the cast from various times when they’d performed locally, so it was a bit like a homecoming for her.

“I only arrived back in May, a bit later than everyone else who’d started rehearsing in February, but it’s been great. Warren Bates is great as the director and everyone was so warm and welcoming.

The inconvenience of her late arrival was more than made up for by Maria learning her lines in New York in rather unique circumstances.

“I got to do that with some of my tutors who had actually been in the original Broadway production of Les Miserables. It was amazing.’’

Maria says she loves being part of the mainly young cast which features a number of new faces who are part of the fresh look that Warren is giving the 2018 production.

“He’s really fleshing it out and at times it’s quite brutal and will hit the audience hard. There’s no way anyone’s going to sit there and nod off during this show.’’

Maria was born in the United Kingdom but came to New Zealand when she was five and New Plymouth has been home ever since.

She started singing 10 years ago, which always had an air of inevitability about it as there was always music in the Mosquero household.

“Dad used to play the cello and I’d always hear that around the house and Mum has a really great voice, even though she’ll kill me for saying that,’’ Maria laughs.

“But she’s very musical and is really into the golden age musicals. And we often watch the movies showing them. I love them too.’’

Maria says she only started taking music seriously once she got to Sacred Heart College. “I played Nancy in Oliver. That really solidified it for me. I felt like this was what I really wanted to do. Before that it was just for fun.’’

“I took it seriously from then on and I’ve been taking acting and singing lessons from Warren Bates at Stage Centre. That was something I did for quite a few years, in fact pretty much right through high school.

Warren, of course is also the Director of Les Miserables .

Locally, Maria’s public appearances have been limited. “I competed in competitions and did a cabaret season at the Plymouth with Operatic, but really I haven’t done much in New Plymouth.’’

Maria says one of the most valuable things she learned under Warren was to ask questions. “You have to dig really deep into the character you’re playing and he helped me a lot.”

Still committed to continuing her studies in musical theatre, Maria says she thinks of herself as both a singer and an actor. “I perform and it doesn’t really matter which one is needed. I enjoy both.’’

One of the things Maria is looking forward to is having her Mum and friends coming to see her perform in Les Miserables.

“Sadly Dad passed away a few years ago, but Mum loves to see me on stage, so that’ll be really cool, even though it hasn’t happened a lot. That’s one of the reasons I wanted to do the show.”

Maria intends to go back to New York to continue her studies, but is not sure when yet.

Her long term goals are ambitious, but realistic.

“I’d like to be working in the industry, either in New York or London. I just want to be successful and be happy doing it.’’

That is one dream she’s dreamed that could well come true.