The emotion of Les Miserables keeps it strong years after it was written, say two of the New Plymouth cast.

Ben Paterson, who plays the emotive Marius, and Sam Mitchell, who plays the calm, authoritive Enjolras, will fully get into character on Thursday night when the New Plymouth Operatic Society’s production opens at the TSB Showplace.

The music and the production can still move people’s emotions even after six months of rehearsals, Mitchell said. 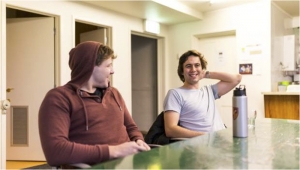 Paterson and Mitchell say it is always rewarding to see the production come together after months of rehearsals.

“This is just raw emotion and I think that’s why people love it.”

Originally auditioning for Marius, he said it was a challenge to get into the role of the cool, calm and collected Enjolras.

“I’ve always found it easier the more emotion there is in something, and he’s almost the opposite. He’s this controlled leader; he can’t show excitement or despair.

“He’s got a single focus, but he’s not inhuman enough to not feel emotions within that.

“A lot of my part involves inspiring the people on stage so that’s just a really cool feeling every night.”

Paterson describes his character, Marius, one of the few to survive to the end of the production, as “a bit of a funny one”.

“He’s all about the revolution and then he bumps into a chick and he’s like ‘cool, you guys can die, I’m happy’.

“I’m trying to relate to him on certain things rather than becoming him.

“I still don’t know if I trust him,” he quipped. 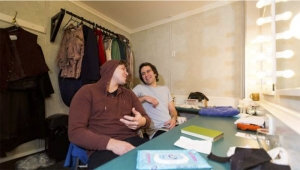 The ‘revolutionists’ are looking forward to seeing the production come to life on Thursday – the first time they do the full show is “magical”, Mitchell said.

“You’ve spent the last six months rehearsing this and finally you get to take people on a journey.”

Les Miserables opens on Thursday July 26 at the TSB Showplace and runs until August 17.
Tickets are available now via Ticketek.