In 1955 New Plymouth Operatic purchased the De Burgh Adams Lodge, in Robe Street. From this base New Plymouth Operatic rehearsed some 30 shows. The society sold the Robe Street rooms in 1981, and moved to leasing the John Avery building in Currie Street, which they later purchased. Within 6 months of purchasing the buildings the society was fielding enquiries from developers for a sale, and the property was quickly sold to developers to build a shopping centre (Now Centre City). Negotiations began in 1987 to purchase Operatic’s current home in King Street, with the purchase completed in 1988 when major redevelopments were undertaken. The complex houses the society’s wardrobe hire arm, set and props workshop and storage space, along with 2 rehearsal spaces, offices, bar facilities and a boardroom.

In 1985 New Plymouth Operatic appointed its first full time Artistic Director, Dorne Arthur, who held the position until her retirement at the conclusion of the 1995 season of Chess. The position remained vacant for the next decade, until the appointment of the society’s last Artistic Director, Warren Bates in 2005.

On 10 January 1968, New Plymouth Operatic’s Immediate Past President at the time, Ken Spear was killed in a road accident with his wife Verla and their two children, Carolyn and David. After joining the Operatic Society, Ken served on the committee, with three years in the role of president, and as stage manager for many shows. As a memorial to Ken and his family the K.H. Spear memorial scholarship was established by the society. Run as class in the New Plymouth Competition until 2002, the scholarship is run annually and now held at the Society’s Rooms in King Street. The Scholarship, now run in an Adult and a Youth class, requires participants to sing two contrasting songs from musicals. In 2007 the Adult section was won by Idelle Hiestand and the youth section won by Caitlin McKee.

Operatic’s first production, a three act production named December Song, opened on December 1 1952, produced by Erika Lagore. With a cast of 90, and two orchestra’s, December Song’s season was just 3 nights long, with tickets costing 6 shillings (60c) for Adults and 3 Shillings for children. 1785 patrons saw December Song, which made the society a profit of £200. After what all considered to a resounding success, the musical comedy ‘A Country Girl’ was chosen to be the society’s second production. The show, which cost just £1100 to mount and made a profit of £590.

Perhaps the most significant event in the society’s history has been the saving of the Opera House. A theatre was originally built in 1883 on the Devon Street site of the Opera House. Known as the Alexander Hall, it was enlarged in 1904 and sold to the New Plymouth Theatre Company and renamed the Theatre Royal but was then destroyed by fire in 1916. After being rebuilt it opened on the 28th of November 1925 as The New Plymouth Opera House and has been the ‘home’ to most of New Plymouth Operatic’s productions ever since. However, the theatre faced demolition in 1969 when its owners ran into financial trouble and the New Plymouth City Council refused to purchase the building. Members campaigned fearlessly to save the Opera House. Then President John Murphy was spat on in the street by people objecting to his campaign to have the council spend money on purchasing the building.

In 1970, although the government valuation was $135,000, New Plymouth Operatic was able to purchase the Opera House for $80,000. Operatic raised a mortgage over its rooms in Robe Street to provide funds for the deposit. To enable the purchase, a number of members; Brien Bennett, Don Clarke, Brian Inns, John Murphy, Leo Noble Campbell, David Parker, Mike Parkes, Geoff Samson, Al Offord and Charles Rush had to sign joint personal guarantees to secure funding. The Society gifted the theatre to a trust for the people of New Plymouth in 1972.

In 1999 there was a major development of the complex driven by New Plymouth Operatic and its members. Today three venues are housed within one complex – the TSB Theatre (the Opera House), the smaller Theatre Royal and the Alexandra Room realising the vision John Murphy had for the venue back in 1969. John’s legacy will always be remembered at the Opera House, with the naming of the ‘John Murphy Green Room’ after the 1999 redevelopment. 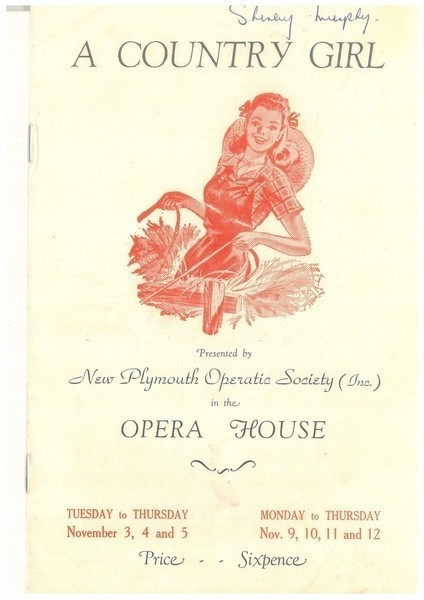 To mark New Plymouth Operatic’s 40th Anniversary in 1992, an extensive history of our society was published. Complied by local identity Brian Clark, this publication was updated and republished as “The Golden Years” in 2002 to mark our 50th Anniversary. Copies are available for sale through the Society office for $10. Contact office@npos.co.nz for more information.

Over more than half a century New Plymouth Operatic has been producing theatre as good as any other amateur organisation in the country, including such world wide hits as Les Miserables, Cats, Jesus Christ Superstar, Evita, Chess, 42nd Street, My Fair Lady and The Sound of Music. Every member has their favourite Operatic moment, may it be Judith Bennett’s ‘Climb Every Mountain’, John Limmer’s ‘Bring Him Home’ or David Marshall’s “Gethsemene” to name just a few. While promoting local Taranaki talent has been our primary objective, throughout our history New Plymouth Operatic has on occasion also had the opportunity to utlilise professional actors, including Rob Guest (in Half a Sixpence, 1978) Tony Williams and Yolande Gibson (Pajama Game) and Brent Brodie (Me and My Girl, 1991). For a full listing of our previous productions refer to the ‘Previous Productions’ Page.

New Plymouth Operatic is always keen to keep in touch with our old members. We’d love former members (and current ones!) to send us an email and let us know what you are up to now, or if you’d like to receive our newsletter by email, contact us at office@npos.co.nz